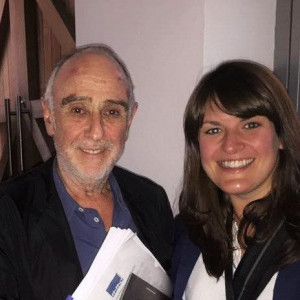 On 8th June 2015, eight MMD writing teams got to spend the day sharing their work, learning, talking, getting advice and feedback from Claude-Michel Schönberg. “It was a truly inspirational day” for all involved and we wanted to give you all a taster of what it felt like to be in the room. So, we asked playwright, composer and author Kitty McDonald to blog about her experience of the day. Here is what she said…

It’s 10am at the Jerwood Space near London’s Waterloo, and I’ve just met Claude-Michel Schönberg, eminent composer of Les Mis and Miss Saigon. Like a lot of musical theatre writers, he is my main man, my Yoda, my 24601.

And today I’ve fallen down the rabbit hole, because Claude-Michel is here to workshop my writing and my compositions. Oh. God.

Having anyone at all, let alone one of the most successful composers in history, critique your work is a weird feeling. Primarily, you want your work to be critiqued and improved. But you also want it to be adored. The stakes are high. And I can tell from the electric fizz in the air that it’s not just me who’s quaking in my stylish-yet-affordable boots.

Claude-Michel is softly spoken, supremely knowledgeable and oozes old Hollywood. He is attentive, not only to every moment of song but to plot, style, action, pace; nothing exists in isolation. And he focuses always on the audience: repeatedly, lovingly, respectfully: the audience. Will they get it? Will it thrill them? Are you giving them your absolute best?

Six hours in, it’s our turn. My collaborator Adam Ford and I step up to present our adaptation of Wuthering Heights. It is precious to us. I’m shaking. We play.

Claude-Michel concentrates our feedback session on the music. Relief floods my entire body when he calls it beautiful, asks to hear a section again, then closes his eyes and sings along. He demonstrates how we can sustain the moments of drama, avoid under-playing them and how, having caught the audience in a dramatic moment, you must not let them go, hold the tension, hold them.  He implores us to embody the novel, the legacy, the soul of all things Bronte from the first note to the last note.

During the Q&A later that evening I found out that Claude-Michel has just written a ballet of Wuthering Heights, which he never mentioned. ‘Today was not about me,’ he tells me afterwards with a twinkle in the eye, ‘It’s about you and your work’. That was when I actually called him a smooth criminal. Oh, and it had been going so well!!

The impact of the day has been massive. It’s not just our session which has informed the rewrite, it’s everything we learned via the other writers.  The quality and diversity of their work was awesome, tackling everything from Pre-raphaelites to Pratchit. It was a privilege to share each session and to soak it all in, with Claude-Michel generously guiding writers to better understand their own craft, in an atmosphere of good grace and hunger to learn. ‘It’s not about me telling you what to do’ he explained ‘it’s about me unlocking what you have in yourself’.

After an 8 hour workshop and an hour’s Q&A, I passed Mr Schönberg on the way out. He grabbed me by the hand and whispered, ‘don’t forget: prolong that verse, hold your audience, don’t let them go.’  I could just grin and said ‘I’ll try’. Then Adam and I gleefully skipped out into the rain and cracked on with a mega rewrite.

What a legend, what a devotee to his craft and what a gentleman.  Mr Schönberg, thank you.

An audio recording of the Q&A session will soon be available on our backstage members area, along with audio archive of other past masterclasses with amazing people like Nikolai Foster, Samuel Adamson, Sarah Travis giving feedback on Members work.

Finally we wanted to give a huge shout out to the 8 writing teams that took part in the Masterclass with Claude-Michel Schönberg. They were…..

Some lovely comments below from fellow members on the Masterclass and Q&A!

“I am not here to teach you.  I am just here to help you discover what is already inside” Claude-Michel Schönberg 8th June 2015

“Just had to write and say thank you so much for yesterday.  Just when you feel you’ve heard it all something like this comes along. I found myself reaching for my notebook about 10 mins in and then never stopped scribbling. CMS seems to have razor-sharp insight and can just put his finger on it.  Anyhow, it was a wonderful day and a really valuable experience. Thank you so much for organising all this – a great venue and everything ran so smoothly.  It was also really great to meet all the other writers as I find we sometimes know one another’s names without ever interacting! There have been so many great and well thought through initiatives coming out of MMD over the past few months that have huge practical value and boost morale, networking and craft no end so a huge well done to all concerned and it really is very much appreciated at this end!”

“So many thanks from all of us for the most amazing day yesterday. The Masterclass was inspiring, thought provoking and encouraging. The man himself, Monsieur Schonberg is simply a legend and so charming with it. Well done to everyone involved in organising the event.”

“This week MMD facilitated me meeting with John Sparks and then attending the workshop and Q&A yesterday. It has been incredible. I frankly can’t believe that I thought Wuthering Heights was nearing completion, when now Adam and I are cracking on with a mega rewrite, bursting with ideas and new ideals. I can’t tell you what a difference it has made. I am so glad that you exist, and that I am a part of you.”

“Once again, I would like to thank you for this wonderful event. It’s incredible I’ve met Claude Michel Schönberg.
London is really magic…”

“Just wanted to say thank you for an inspiring evening with Claude-Michel Schonberg.  An unforgettable hour. Is there nothing you guys can’t do?!  Congratulations and thank you for making it happen.”