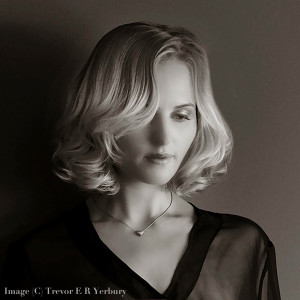 How and when did you start writing for Musical Theatre?
Back in 2009 I was working for a youth drama group and the theatre where we met decided to put on a festival. I asked the organiser if I could present a show I had written as part of the line-up. I didn’t quite count on him saying yes…but he did and so I pretty quickly had to write the promised show.

What are you working on at the moment?
One project that I’ve been developing over the past year is a British rock comedy musical called ‘The Bearded Lady’s Tattoo Parlour’ with book writer Liz Adlington. It’s a bit nuts, set in a small English village, with bickering neighbours, Norse gods and a whole lot of ridiculousness. It’s such a fun show to write. I’m also working on a new actor/musician show for the New Wolsey Theatre with Perfect Pitch and a historical comedy about the life of King Athelstan for the Rose Theatre in June.

Do you have a regular writing routine – a time of day when you write best?
A perfect day is writing first thing. Ideally I like to write at home every morning but a lot of the time I’m on the move so it’s notebooks on buses.

When you have an idea for a new show, what is the first thing you do?
Up until now with the people I’ve worked with, we’ve started by talking a lot about the show we want to create and from there I like to go and write a few song ideas straight away whilst the ideas are still fresh.

What aspect of the craft is most challenging for you?
Storytelling and making sure the songs have a point and move the story forward. I come from a pop writing background where storytelling is there, just not to the extent that is necessary in good musical theatre writing. That’s definitely something I have to keep an eye on.

What do you do when writers block strikes!?
Keep writing.

What one piece of craft advice would you like to share?
For the most part it’s such a collaborative art form so I think good working relationships are really important. Be open, don’t be too precious (songs will be cut), work with people who challenge you creatively and enjoy the process. It’s going to take a long time to finish the show so you might as well enjoy the ride.

Which Musical theatre writer has had the biggest influence on your career?
I couldn’t name just one but I’m very lucky to be working with some really talented writers at the moment. They’re the people who are having and have had the biggest impact on me as a writer. I remember the first time I heard the music from RENT. That was a pretty pivotal moment for me falling in love with theatre. So Jonathan Larson also.

If you had a magic wand what would be the one thing you would change in the sector?
I think a lot of magic is happening already within the musical theatre community here in the UK. I’ve found a great support system amongst other writers creating and sharing work and more and more companies, theatres and producers offering creative opportunities to develop new writing.

What are you listening to on your ipod at the moment?
‘Zaba’ – Glass Animals

What is the best thing about MMD membership?
Being part of a musical theatre writers’ community. What were the circumstances behind you joining the MMD board? And how long have you been a board member?
Richard Walton, one of the original Board Members when the organisation was Mercury Workshop invited me to join the Board – I think it was around 15 years ago

How would you say your skills and experience compliment the other board members?
I have considerable commercial producing experience and having run the Cardiff Festival, and produced musicals in the West End and on tour, both new and revivals, have a considerable history of knowledge to pass on to writers and to assist in the Board’s decision making.

How has MMD changed since you joined the board?
Considerably!

What are your hopes for the organisation?
That we will continue to grow and be able to help more and more writers achieve their ambitions of productions of their shows.

What was your most memorable theatrical experience as a child?
Being around my mother and in her office where she was working for a theatre producer during the production period for the musical ‘Robert and Elizabeth’ in 1964.

Who are your heroes and why?
I found this the most difficult question to answer. I am citing two heroes of mine both of whom have helped me immeasurably in my career and both of whom are men of integrity, intelligence and talent. Firstly Ted Chapin: President of the R and H Organisation in New York. When I was starting out on the journey to produce the first Festival of Musical Theatre in Cardiff I was asking everyone what they thought this Festival should be, what it should showcase, who it should appeal to. I was lucky enough to be introduced to Ted and to meet him in New York. He gave me the best advice which I have tried to follow ever since which is that one has to be passionate about what one does in order to do it well. Re the Festival in particular he told me that I should programme what I wanted to do and not what people told me I ought to do and that if in future someone else ran the Festival they could change its direction. I proceeded to do just this. I continue to try and find the passion in everything I am doing – even though at times this can be difficult. It is important to be proud of what you are doing and with that passion and pride you can make it a success. Ted is still a great friend and mentor and I am so lucky to have this.
My second hero is producer Michael White: I was lucky enough to work for Michael for some years and he taught me everything I know about being a producer. Or what he (and I) think a producer is. A producer is not someone who just raises a lot of money and finds a star to appear in a show. He is someone who finds a project, nurtures it, chooses the right creative team and lets them get on with creating the show. He encourages, criticizes when necessary, and provides all the various needs to get the show on. He taught me about dealing with actors, and creatives, about paying the right fees and not just the cheapest you can get away with, about nurturing a show, and the most difficult decision a producer ever makes – when to take the show off. Michael always said that he produced 350 shows in his time of which about 10 made money and those enabled him to do the other 340 which he wanted to world to see. A producer’s prime focus should be the creative product and not necessarily the monetary value of the project. However, creative excellence and financial success are not mutually exclusive. More than any other producer of the 20th century Michael took risks on writers, directors, actors – in my mind there is no question but that he is the greatest producer of the last century.

When you were growing up what did you want to be?
During my teenage years I worked in the theatre producer’s office where my mother worked during school holidays. I saw then that there was a place in theatre for someone with theatrical knowledge and a business brain. It was there and then I determined I wanted to be in theatre and end up as a producer.

What’s your favourite musical?
The received opinion in the theatre industry is that you should always cite the show you are currently working on as your favourite. Anyone who knows me knows that the answer to that question has to be ‘Crazy for You’. I was lucky enough to be Associate Producer on the first production in 1993 and nothing has yet superceded that wonderful show in my life.

If you had a magic wand what would be the one thing you would change / improve in the sector?
I would encourage all the major producers/theatre owners to spend much more time (and money) developing new musicals and not just go from ‘page to stage’ and think that putting a star in something that is based on a film and throwing millions at it is the way to have a success.