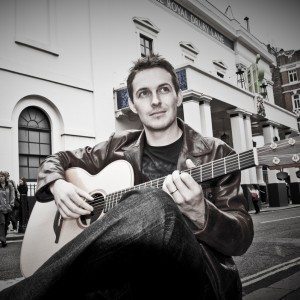 Dougal Irvine reflects on his time as the Resident Composer at the Royal & Derngate Theatre, Northampton. For any composers considering applying for future residencies this is essential reading. As you will see below the residency had a profound impact on Dougal’s career. In fact, before he applied Dougal was considering leaving musical theatre altogether….

I owe a huge amount to the Cameron Mackintosh Resident Composer Scheme. It pretty much kept me in the business.

In late 2011, when the first round of schemes were announced, I was about to give up working in theatre. We’d just had our first child and I’d become sole bread-winner for our family. Workwise, I’d had some critical/commercial success in my first 2 years as a writer, (Departure Lounge, Britain’s Got Bhangra) but pro rata I was earning less than minimum wage and it wasn’t enough for three. I couldn’t see a road ahead. It felt like you couldn’t make a living unless you had something running in the West End which, for a musical, meant getting the rights to Harry Potter! Anyway, I’d run out of playtime. I’d been shortlisted for a Teach First program and that was that, goodbye arts, might do the odd acoustic night somewhere. And then this email from Mercury Musicals arrived about the resident composer scheme. Neil Marcus had rung me to say it was something I should apply for. I thought, “What the hell, if I get it someone somewhere is telling me something.” I guess what appealed to e most is that it seemed to be aimed at someone like myself, who’d had a few things on already but needed time and space to keep working and develop their craft. After a lengthy submission process involving writing 15 minutes of music on spec plus two interviews (one in Northampton), I was so shocked when Laurie Sansom rang to tell me I’d been selected that I think the first words out my mouth were – “you’re joking”. Sounds cheesy but I was in tears of disbelief. You face constant disappointment and criticism in the industry. The fact that part of the industry itself was choosing to open arms and go, “no, you belong here, stick around for a bit”, is something I still try and hang on to during the tough times.

The residency itself was a joy. Eleven grand was going to keep my son in nappies for the next six months so I could focus purely on the work. I was given a little room at Royal & Derngate and spent three months working on their Festival of Chaos season, part of the Cultural Olympiad, under the stewardship of Laurie Sansom. I learned so much from Laurie, from his work ethic, through his understanding of classic texts and their place in the legacy of theatre; to his rehearsal room dynamic, leading from a fun/creative place where all opinions count. Everyone trusted him – he was kind, patient and a real visionary. There are few that care as much about theatre as he does and I try to hold his standards of practise in what I do now. I think it’s important that future resident composer schemes incorporate some sort of mentorship while the composer is there. The actual work involved me writing music for modern adaptations of two classics, The Bacchae and Blood Wedding (above L to R). We used the same company of actors and creative and the productions ran in rep at the same time in two venues, an abandoned print works (Bacchae) and the Theatre Royal (Blood Wedding). The briefs were very different. An electro/programmed heavy sample score for The Bacchae and a contemporary folk/percussion based score for Blood Wedding which I also played on. I got to collaborate closely with the playwrights Rosanna Lowe and Tommy Murphy, also setting some of their lyrics to music, something I’d not done before with a living writer. It was so much fun to create two very different musical worlds and I got to see the inner workings of how a producing house like Royal & Derngate functions. I got a sense of the whole team through box office, marketing, the café staff and workshop. I got to sample ‘Cake on Fridays’. I got to see and believe that yes I could contribute to something like this on a regular basis and there were and are many productions happening all over the UK, not just London, which could employ people like myself. It’s kind of obvious, but with future residencies I think it’s important to make sure the composer/lyricist spends time – days/weeks/months of the residency actually in the building and working on output which contributes to the theatre programming.

The last few months were spent winding down and writing a fresh draft of my musical The Busker’s Opera. I arranged a read-through of it in London to which Laurie and John Manning, (producer at R&D) came down to support. The piece eventually got optioned with some commercial producers. Following the residency I now had first class credits on my CV and work, real career sustaining work, started to trickle in. It’s still not easy, but I can see a road ahead, the scheme kept me on that road. I’m even back at Royal & Derngate this Christmas, having written songs for the Snow Queen. I’m excited to go back to a place which holds such great memories of a creative, supportive and formative time.