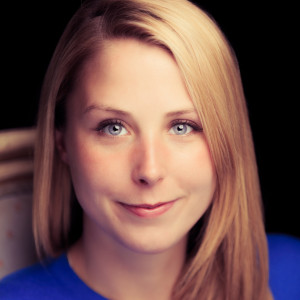 I trained at LSMT as a musical theatre performer, but as a writer started by focussing on writing plays, particularly comedies. I was lucky enough to have a couple of plays produced at the Lion and Unicorn in Kentish Town which really helped me cut my teeth. I started writing the book for musicals in 2012 when asked by my friend and current writing partner, Tori Allen-Martin to write the book for a show with music by Tim Prottey-Jones that Interval Productions were producing.  This show started life as ‘After the Turn’ and is now titled ‘Muted’.

I was given a very short space of time to write the show and we workshopped and rehearsed it at the same time. We had two weeks rehearsal – I was directing with my husband Tim, and it was a chaotic but hugely rewarding learning curve getting a show from the writing stage to a production at the Courtyard theatre in under three months!

Because of the nature of this industry, I tend to have quite a lot of projects on the go at any one time. That way if one goes quiet whilst waiting on a funding application/venue etc., then I pick up one of the others!

In terms of musicals, there are a couple in development at the moment. Tori (my writing partner) and I are working on a commission for Bob & Co and Idris Elba which we’re going to be doing a workshop at the Hackney Empire and also possibly in South Africa later on in the year.

I’m also working hard on the sci-fi musical I pitched at BEAM – The Unblinding. We’re creating a digital version released in episodes, so I’m currently working to tight (self-imposed) deadlines on that, with a view to showcasing the first episode at Interval Productions’ #MadeinLDN event in June.

In February we staged a showcase of the musical I mentioned above (Muted) and we’re currently looking to get it a full run somewhere late this year or early next.

I also have a couple of plays in development – one a co-write centred around a mixed race girl’s relationship with her Muslim taxi-driving father  – ‘Burkas and Bacon Butties’, and also a site-specific comedy set on a campsite for Different Breed Theatre, a creative collective I am involved with.

Nope! I like the idea of it though…I freelance all over the place – coaching, directing, running workshops and collaborating with other artists, so I basically write whenever I get time.

It completely depends on the show. For the current commission Tori and I are working on, we did months of research before we felt ready to write on the subject matter which we really have to do justice to.

However, for other things it can come from one character, or an over-arching idea. I like to have a rough structure in my head before I write, particularly if it’s a complicated plot. ‘Streets’ was told in flashbacks and interrogations, so there were things that the audience couldn’t know at certain times, and a big reveal at the end, so that required detailed plotting.

For The Unblinding, it started with me reading Brian Cox and a lot of National Geographics to imagine this world of bioluminescence, time and the creatures that weave it. Then the main character, Eden’s voice appeared in my head. I wrote and workshopped the first act (thanks to ACE), and then wrote it as a novel for National Novel Writing Month. I have now re-plotted it into episodes for the digital version, stealing the bits I like from the novel and binning the rest – this has probably been the most long-winded process so far!

I write dialogue quite naturally, and I tend to write scenes a lot longer than most MT shows, with fewer songs. Something I work quite hard at is the integration of the songs with the text, where they come and how the music is used in the show…I really challenge myself to steer away from cheese and be as original as possible in the way that music is used.

That’s an interesting question. I’m not sure I’ve had it yet – touch wood! However I’ve definitely had times where there’s been a structural problem I haven’t had the answer to yet. My way of breaking through this is to back away from the computer, go for a walk with my dog, see the sky, think of other things, and then a simple solution will come to me and I’ll wonder why it’s taken so long to get there!

I’m not sure I’m qualified to give advice! However my favourite part of the writing process is the rehearsals – hearing the piece come alive. At this point, I trust the actors – if they’re struggling with a line, it’s probably wrong, and if they have questions, then the audience will too. Also giving them freedom to play and not be too reverent with the text will bring levels and nuances you haven’t expected. I guess what I’m saying is it’s good to collaborate and not be too precious. Oh, and it’s never ready, so get it off the computer and into some actors hands – the detailed tweaking can happen in the room!

This is a difficult question…I know who my favourites are, but my writing is nothing like theirs so I’m not sure it’s fair to cite them as an influence!

I had the pleasure of working as assistant to Jeffrey Lane (Dirty Rotten Scoundrels/Women on the Verge) on Women on the Verge in town which definitely taught me a lot about the writing process on a commercial musical.

I’d say my biggest artistic influences are playwrights Jez Butterworth (Jerusalem) and Laura Wade (Posh) – if I could craft a piece half as well as either of those two, I would die happy!

With my magic wand I’d create a mid-scale venue in town which produced short runs of new musical theatre – both transfers/developed versions of smaller fringe venues where artists have self-produced, and new shows they’ve developed with artists from scratch. Something that UK MT writers can aspire to with a clear development pathway. I’d also make the industry less stuffy, more diverse (both on stage and off), more collaborative and younger…oh and cheaper tickets to west end shows please!

Eliza and the Bears – Tori has been doing vocals for them and performed on Radio 1 Live Lounge the other day – a fab sound!

The feeling of connection with other writers and being kept up to date with their work – we’re definitely stronger together!

Sarah has also had success with various plays including From Where I’m Standing (:Delirium – Pegasus Theatre Oxford and Underbelly Edinburgh).

Additionally Sarah works as a coach and trainer, facilitating workshops with artists and creatives.