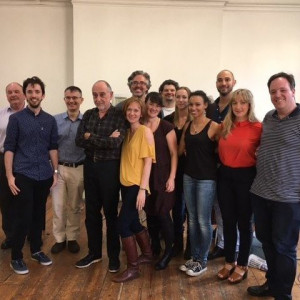 I cycled in to RADA studios from Crystal Palace for day 2 of the MMD Claude Michel Schonberg Masterclass on Wednesday having previously been absolutely convinced that it was Tuesday. It had been a mad couple of weeks working towards two new shows opening on the 24th September, but having broken the back of those I was hugely looking forward to another day in the workshop room listening to brand new musical theatre work and geeking out about it afterwards in the pub. Up in studio 3 at RADA the group of writers (most of whom were the same as the last group) met and enjoyed the snacks put on by the MMD team. It turns out that biscuits really are an essential part of the creative process. I was looking forward to meeting my talented colleagues and hearing their work. Colleagues who, over time were becoming friends.

One thing that CMS said to me after the workshop was that it was so great that everyone was there to work, “there is no ego in this room.” It struck me that he was right, and it seemed that one of the things that was contributing to this atmosphere was that we had all started to get to know each other. It’s easy to want to prove yourself and to become defensive of your work in front of strangers.

It’s a perfectly natural reaction and one that every writer will struggle with because you are putting a part of yourself out there for judgement. What I hadn’t considered before is the role that community and friendship plays in the gradual dissipation of ego.

To me it felt there was a palpable difference in the room from the first time we had gathered together six months ago. In that class, everyone was wonderful and friendly (as all are delightful people) but looking back at it there were these almost imperceptible barriers that existed. I had put up a big old wall myself. It’s an important wall. It’s a wall that is built to defend your very self from criticism. We have every reason in the world to want to build it, thick and strong and put nuclear weapons behind it, to guard ourselves from the slings and arrows of outrageous critique. It makes complete sense. But like many things that make complete sense it also prevents us from growing as individuals and artists. Because the sad thing about walls is that, while they are very good at keeping other people out, they are also excellent at keeping YOU in. If you are happy to limit yourself as an artist then be my guest, be Donald Trump and build your wall. Hell, maybe you can even get the Mexico to pay for it. But if you don’t want limits then we’ve got to start dismantling our walls.

What is so horrible about the dismantling of your wall is it leaves you open to attack from your enemies. This is why the cultivation of community and friendship is such an important, dare I say VITAL part of becoming a good writer. It makes no sense to leave yourself open to attack from your enemies, so you build a wall. But once those enemies have become your allies it makes no sense to leave the wall in place. It no longer serves a function, so you have to take it down.

I think this is what I noticed yesterday. The walls had started coming down. Whether conciously or unconciously the people in the room had started bashing down their defences, one brick at a time and as a result we were not so much individuals there to have our songs judged. We were a collective of artists there to learn and support each other. It’s funny how a single statement from CMS can seem to contain so much within it. But this seems to be one of the hallmarks of his style, he can say an awful lot with very little (probably what makes him a brilliant songwriter and storyteller).

This is why organisations like MMD and Book, Music, Lyrics (BML) and MTN are so vitally important. Not only do they allow writers to meet and provide support for each other, make friends who can then get drunk and geek out over musical theatre. They are the wall destroyers, the dambusters that, in cultivating community, provide one of the most vital things for the growth of any artist. Freedom. Freedom from the walls we have built to protect ourselves. For that, we should give these organisations a hearty standing ovation and many curtain calls.

But moving along. Having noticed this subtle shift in the group dynamic (but not being able to articulate what it was) the day began with a welcome from Victoria Saxton and CMS. CMS said he would like to concentrate this session on songs from our musical that could also potentially stand alone. In other words, he was going to look at and comment upon the structure of the songs we were presenting.

Several of the things that he commented upon were things like song length. It’s an interesting one, and probably not one that we think about too often. As writers we think that a song should only be as long as it needs to be to say what it needs to say. It’s important not to be indulgent and we are rightly taught that… however CMS said something interesting that he reiterated constantly throughout the day. You must see things from the audiences perspective and you must give them what they want. CMS told an interesting story about the ancient Greek people:

In ancient Greece it was customary for every Greek citizen to make a pilgrimage to a place called Delphi (originally the Oracle at Delphi was one of the wonders of the ancient world) where they would receive their fortune/fate from a mystic. The people would stay for three days and one of the most important parts of their visit was attendance at a drama. The purpose of drama in ancient greek times was so that an audience could recognise and solve problems within themselves in the process of watching. This was the original meaning of catharsis.

CMS said that an audience wants to recognise part of themselves on the stage, so that they can step outside themselves and see within for a moment, good drama can tell stories that heal us, that give us the means to solve our own problems and this is one of the reasons why we connect with good storytelling so deeply. Because in connecting with the story, we are actually connecting with ourselves. And in a world where we are so busy and have no time, I certainly find that I can quickly become a stranger to myself. Stories and songs are a way of reconnecting with what is true inside each of us.

So… a song does NOT need to be only as long as it needs to be in order to say what the writer needs it to say.

A song needs to be only as long as it needs to be in order for the audience to FEEL what they need to FEEL.

Several times throughout the day we saw this in action, we as writers were diligently writing songs that were not indulgent, we had all seen too many indulgent songs and shows written that we knew what a cardinal sin that was. But in doing so we were selling ourselves and our audiences short. There were moments where we could take more time, give more, repeat more, really let something land and hit home for an audience. It’s the difference of an inch, and that inch can make all the difference between an audience sitting forward and an audience leaning back.

And again, recognising this relies on a community of people watching our work develop, our writing community is also an audience (albeit a highly knowledgeable one) and they can tell us when they need more. We should listen when they do.

For me these were the two big revelations that came out of the day:

1. In the words of Lin-Manuel Mirand “Put yourself back in the narrative”. Being part of a community and getting to know your fellow writers is hugely important to growth as an individual artist. Break down the walls.

2. Put yourself in your audiences shoes and give them what you want to say AND what they need to feel, both are immensely important.

The day was filled with wonderful new material, wonderful insights, brilliant performances from invited guests, my particular thanks go to the delightfully talented Philippa Hogg and Alex Young who sang material from The Wicker Husband. The day ended with a delightful evening with fellow writers and performers getting drunk in a pub and talking about everything from life to love to theatre. Glorious. My bicycle is still in Goodge Street.

With immense thanks to MMD for being such a champion of the artistic process and (along with BML and MTN) for providing us with the tools, sledge hammers and jack hammers with which to dismantle our walls.

Click HERE and scroll down to the bottom to see brilliant comments from fellow MMD Member Caroline Wigmore in response to Darren’s blog.