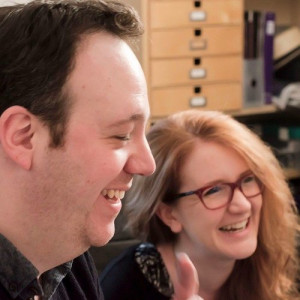 A while now! Probably about eight years.

I started writing songs when I was ten. When I was sixteen I read an article on Whatsonstage.com by Mark Shenton. It was about the Bridewell Theatre. I remember it was described as a musical theatre writing ‘lab’. So I wrote to the artistic director, Clive Paget, who became a mentor to me for several years, before he moved to Australia. Meeting Clive – and seeing his production of Songs For A New World with Nigel Richards – was the turning point for me. That was when I decided I wanted to be engrossed in the craft of it and learn how to write professionally.

With Susannah Pearse, I am working on a new show called ‘Halfways’. It opens in 1920, when Britain was suffering terribly from the trauma of lost lives in the first world war. The setting is a luxury passenger liner carrying a group of passengers who gradually realise they do not know where the boat going. They soon learn that they are dead and ‘crossing over’ to Heaven and Hell…..And for something completely different: with Lia Buddle, I am writing an hour-long children’s show (provisionally titled ‘The Adventures of Woof and Purr’). It’s based on a series of charming Czech folk tales about a dog and a cat who live together and wish they could be more like humans. As they go on various adventures, they fail rather comically whilst trying to be something they are not!

I write every Saturday afternoon. I have a keyboard in my flat but I like the discipline of going to a practice room with an upright piano for three or four hours at a time. And the rooms are soundproofed so there are no complaining neighbours!

Tons of research in parallel with many months refining the structural work. In the case of The Stationmaster, we didn’t write a word or note for the first year and a bit. Our focus was the architecture of the story. We’ve just got to a similar point with our latest project, Halfways. We’ve found it takes a lot of time to do the foundations properly (particularly when we’re working other jobs most of the week!). It’s a fascinating starting point though – digging into the period of a story, the different musics heard at that time, finding other books, play and films by contemporaries …all that digging is an exhaustive, invaluable process. And it’s often a good way to stumble across illuminating details that give the story valuable context.

All of it. Whatever you’re wrestling with at the time – words, music, how to order the story – is always the most challenging thing on your plate. And that sweet spot where the script, lyrics and music meld together seamlessly… that’s the incredibly tough goal we’re striving for!

By day, I earn my keep in marketing. There’s a brilliant little book called ‘A Technique For Producing Ideas’ by an adman called James Webb Young. He was a marketing creative and wrote down a method of working through writers block. You can probably find it on Amazon second hand for 0.01p. It’s nice and short and really helps.

I have two favourites:

“Get the best paid part time job you can.” Lynn Ahrens

“Keep going. Because, eventually, everyone else gives up.” Maury Yeston

It’s a tie between Stephen Keeling’s terrific score for MADDIE and Steve Brown’s SPEND SPEND SPEND. I’m delighted that SPEND has just had its cast album re-released via Dress Circle. Not enough people really know the show because for years the album was incredibly rare and expensive. But its, without a doubt, one of the best British musicals ever written.

I’d magic into being a Musical Theatre Writers Fund – a healthy pot of money that writers can apply to receive small grants from. £40 to have an hour-long session to try out a new song with a professional singer. £100 to pay for a few hours of practice room writing time. £350 to record a rough demo. Things like that.

The new Broadway revival recording of She Loves Me. Though Hamilton is still my go-to cast album of the past year and a bit!

Being part of a writing community. And the lovely, supportive atmosphere fostered by Victoria through initiatives like BEAM. Everyone was cheering each other on – if there were any egos flying around, I missed them. It was exciting and joyful – it felt like being at a summer camp! I’ve also made many dear friends through joining MMD, particularly the tight-knit monthly Lab group. And, best of all, it’s thanks to MMD that I met my writing partner in crime on The Stationmaster and Halfways, the brilliant Susannah Pearse. So, all in all, joining MMD has been pretty life-changing.