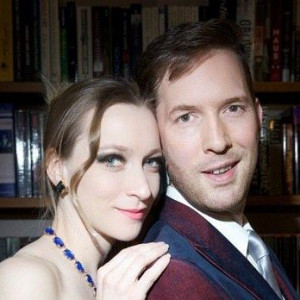 SLY: We joined earlier this year around the time of BEAM and have already got so much from our membership. We were fortunate enough to be selected for the Claude-Michel Schonberg masterclasses and present some of our work in a Scenic Route cabaret.

SLY: ‘The Most Assassinated Woman In The World’ is about a real life actress working in the French Horror Theatre in France in the 1920s. It’s a tale of ambition, violence and the darker side of human nature, but hopefully laced with enough black humour to entertain.

MR: It’s a backstage drama which the play-within-a-play will mirror. The themes are of naked ambition and revenge. There is an actual murder in the company and we see the cast try to cope with the fallout of this. We are looking at the question: does watching violent entertainment increase or diffuse an audience’s appetite for horror and its own capacity for cruelty and violence?

SLY: This is our first full scale musical. Michael and I have been working mainly within character lead cabaret for the past ten years and often for ourselves as the performers. We have written individual songs for shows and other singers too but never on this scale.

MR: We have always been interested in story telling through our songs, or using them as part of short character studies but it’s a new challenge to write a large ensemble piece over two acts. That is partly because it’s a longer process and we have to go much further in it’s development before we can fully mount the work and risk money on it. We have previously been used to presenting our work more rapidly when it’s a two hander.

SLY: We tend to write during the day as we perform most evenings. We get a lot of work done on trains too.

MR: Yes, somehow being in transit makes us more productive. We will work together perhaps three days in a week at busy times. As for most writers, it has to fit around whatever pays the rent. If we are gigging that night, we will still continue to discuss the work and make notes in the dressing room.

SLY: I have about ten shows I want to make in my head right now. This musical has been gestating for about six years as there was a lot of research to do. For Julie Madly Deeply (our cabar-play about Julie Andrews) I spent about nine months watching all her films and reading books before going into the writing room with Michael. There is always lots of discussion and post-it notes and chunky pens involved. I think you have to have your story solid before any scripting or song-writing can begin whilst being open to the change that other collaborators bring.

MR: Yes Sarah is good at bringing form and structure to our work. I can be bit too lateral sometimes. Specifically with a song, we would spend time discussing the point of view of the singer, what is the central ‘cry’ of the song. It helps me to think of a song as an action taken by a character, something they need to do to release or understand what they feel. Once we have identified that, the mist quickly clears. It’s about finding the premise.

I think I learned from Julia Cameron that the most significant part of the creative process is to create a void. A blank page or a silence. A place that your imagination can start to fill. For us, that translates as making space in our diaries together. That’s the first step, we allocate time to a new idea. We only have a finite amount of it each year.

SLY: Having patience, both with myself and the process. I’m writing the book as well as the lyrics and there are so many possibilities and pit-falls it can feel a bit overwhelming. I’m loving the challenge though.

MR: Embarking on a long form piece makes my commitment phobia twitch. Is it a good enough idea? Are we wasting our time? Am I capable? How long will it take? Blah blah. It really doesn’t help. So I try to focus on taking pleasure and on learning as we go. That’s why MMD is great, you see that you’re not alone with these challenges.

I also think with any collaboration that there is an important and subtle dance of maintaining trust. Of getting comfortable with each to make offers and being ok with those not always being approved of. Of having trust in each other’s judgement and respect that we need to be free to be wrong sometimes. That stuff takes a while to learn and build in a partnership. I enjoy it though.

SLY: Go for a walk, get up and move, make a cup of tea. Sometimes you can be staring at something for so long you just grind to a halt. I get some of my best ideas in the kitchen whilst Michael is making us lunch!

MR: Yes you can really hit a point where you’ve talked a lot and gathered ideas in the front of your mind but you need to actually come away from it and let your brain do some filing and tidy its ‘desktop’. It can happen quite rapidly sometimes. I find in a good collaboration, you can talk yourselves out of a block more rapidly.

SLY: Never be frightened to throw stuff away, no matter how much you love it. It will have taught you where you need to go next…

MR: I love how a phone recording app allows me to easily capture and catalogue ideas now. We might improvise ideas for a song or theme, or perhaps a conversation if we are brain storming. I then keep what is useful and heed what is not. Often the latter is equally valuable. Being able to freely improvise unlocks an intuitive mental connections and often a bigger leap of imagination.

SLY: Like so many writers I am sure: Stephen Sondheim. For showing me what is possible when the mind and heart are working together.

MR: I’m having a talent crush on Jeanine Tesori at the moment. Caroline or Change and Fun Home are inspirational to me. Such beautiful, truthful and poetic shows. Also, the recent NT production of Threepenny Opera has now rekindled my ongoing love affair with Kurt Weill. His harmonic language and melodic choices thrill me.

SLY: Less focus on well known ‘names’, both on stage and in the production team. One venue would only look at our show if we had a famous director attached. Thankfully there are some smaller venues willing to take a chance on a new team.

What are you listening to on your iPod at the moment?

SLY: I just bought an album by a Czech singer called Sylvie Krobova. I don’t know what she is singing about yet but it sounds amazing.

MR: For MT, I keep going back to Craig Adam’s Therese Raquin. I love it and hope to see it remounted soon. My arranging gland is being stimulated by Perhaps Contraption’s new album and the work Catherine Sauvage did with Jaques Loussier. Amazing stuff. I discovered her whilst researching for our character La Poule Plombée and her show “Je Regret”. We will be doing a run of that show in February at Zedel.

SLY: The sense of community: it’s been wonderful to be so immediately welcomed into this world and to witness all the amazing new work being made.  Thank you J

MR: It’s been a great pleasure to connect with MMD. Everyone has been supportive. We have already benefited hugely from the pooling of knowledge and networking. BEAM was such a fantastic event to be involved with and I can’t wait for the next one.