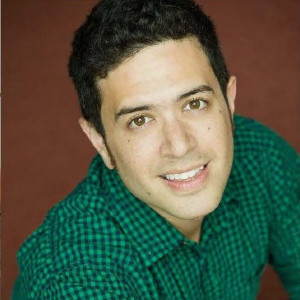 Since I gave a talk with Adam Lenson last spring.

I had played piano and been involved in theater on parallel tracks as a kid, and when I got to university (where I studied as a performer) a confluence of events nudged me to combine those two interests into musical theater songwriting. First-year students weren’t allowed to audition for school productions, so I started music directing and writing incidental music for them. Audra McDonald’s first album came out and expanded my imagination for what musical theater could do. A teacher of mine who was a composer told me I had a voice through my music.

I’ve got commissions from Roundabout Theatre Company, Playwrights Horizons, and South Coast Repertory all in various stages of development, and a new show, String, hitting the boards soon in Seattle. I’m also working on a fun project for a cruise line with John Tartaglia, produced by Stephen Schwartz.

The time I write best is anytime there’s a deadline nipping at my heels. I’m pretty good about setting working hours and sticking to them, but these days I find I need a concrete task to get going. The time of day doesn’t matter so much as a clear idea of what needs to get done.

I will usually try to write a song straight out of the gate. It’s the clearest way for me to answer the question: does this idea really sing? Once I solve that, I’ll put the song aside and focus on the bigger picture with my collaborator – the plot, the characters, what our thematic pilot light is, etc. While my bookwriter collaborators tend to write from beginning to end, I like to follow the path of least resistance and write the songs that come most easily to me first. This helps me discover the musical language of the show, because this first writing is driven largely by instinct, and I can step back after a few songs are written and start to see a musical world take shape. I will also do musical “research” by making an inspirational playlist for each project I’m working on. They can include songs specific to the style or period of a particular piece, or just songs that feel “right” to me in my gut. So the playlists are quite varied in genre and era and often don’t have any surface sense of logic to them at all. I’ll listen to the playlist at the very start of the process, then put it away and never listen to it again.

I think it’s that writing musicals is not just about writing a good song; it’s about writing the right good song. So much of this, for me, is about a collaborating with a bookwriter and understanding how songs are being used in the storytelling. Like many writers my age, I got known writing standalone songs and song cycle-type pieces where the songs are, quite literally, everything. In a bigger musical, the songs feel like they’re everything, but actually rely so much on the overall structure of the show, the song setup, the decision about what particular moment is being sung, in order to land.

Despair, of course! In smaller instances, I’ll go for a walk and a solution to whatever problem I’m trying to solve will usually rush in. For bigger and longer bouts, I’ll try to read books, and go see shows – I love being in theater spaces because my brain will instinctively start imagining all the things that could happen on a stage. But mostly it’s just despair, until suddenly I’m working on something and the despair goes away.

The idea of leaving space is an underrated one that I’ve come to value more and more over the years. Lyrics should leave space for the music to tell part of the story; a song should leave space for the actor to tell part of the story, etc, etc. A great musical is great because all the elements are allowed to collaborate – and writing a musical is so much about calibrating each element so that the spaces are filled in just the right ways. I suppose it’s a slant on the old Sondheim principle: less is more. If each element does a little less, it allows for them, together, to do more.

Lynn Ahrens and Stephen Flaherty have been mentors and champions and gave me opportunities that I can trace a lot of career accomplishments back to. Michael John LaChiusa also looms large, because he was one of the first composers whose work made me go, “Musical theater can do THAT?” even before I had the notion to start writing it.

I’d make musicals cheaper to produce. (Which, since I’m only allowed to say one thing, I hope would make it easier for producers to mount large-scale productions of riskier work, and get a more diverse array of writers produced.)

What is the best thing about MMD International membership?

Getting a glimpse into musical theater writing across the pond!