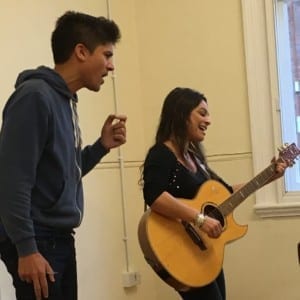 I dreamed a dream …

And then it came true.

At RADA. Because 23rd November was the day we got to work on our musical compositions with legend Claude-Michel Schönberg, composer of Les Miserables and Miss Saigon. All thanks again to the top team at Mercury Musical Developments who keep coming up with brilliant opportunities for writers.

It’s 9.30am, and Sara and I feel like we did before our first BEAM showcase. Dry mouth. Jitters. But super, super excited for the day. We spot fellow writers heading to RADA, some solo, with guitars over the shoulder, some with a mini-entourage of singers. Nervous smiles across the studio room.

The plan for the day was for each writing team to perform two songs and then work through feedback. But like all good theatre, nothing went exactly to script and there were lots of audience surprises along the way. Claude-Michel likes to keep us on our toes!

We’re up second, with two songs from our new musical Barcelona. It’s a musical about sexual fluidity and a celebrity couple who face off fascists and separatists to create a new country where everyone can be who they want to be regardless of labels or sexuality. We have an animated discussion about the plot, and Claude-Michel wonders if Barcelona really has changed as much as when he first visited in the early 1970s. The liberalism of Barcelona creates the running joke of the day, as everyone is encouraged to see if it is a sexual paradise.

Sara sings two numbers from our new show, a love ballad called Heart’s on Fire and the baddie song, I Want the World to be Straight. We get some really great feedback about tweaks that we could make. Claude-Michel’s interest is piqued and so he says, “play me the opening number”.

“But it’s written for the whole cast…” He still wants to hear it.

Did we really just do that? Or was that dreaming a dream?

They say Claude-Michel can be a man of few words, but the day is filled with one-liners from Claude-Michel that effortlessly trip off his tongue, and contain in a single-sentence the wisdom of over 40 years of writing musicals. “The song always comes in a crisis, and is always an answer to a question”, he says. “Let your musicality dictate your lyrics. Don’t ever let lyrics dictate the melody”, he warns. “It’s not just music but theatre”, he smiles. “Don’t forget the theatrical, and keep surprising your audience”. Well he certainly did that with us!

And one that stuck with me, “throw up and run with the impulse!” Or as we often put it in playwriting, “vomit, then sculpt”. What refreshing honesty and candour from someone who has done and written it all. Don’t ever censor yourself when you start. Just go with it.

Other gems of the day were that when you have a hook don’t let the audience go, and that as writer/composers we are the first audience. We have to keep bringing the unexpected, and move ourselves first before we can move others.

Claude-Michel has a gift for getting right to the nub of the matter, and his feedback was beautifully tailored to each group. For some, his feedback was not about the music or lyrics but about emotional honesty, for some it was about finding their style and their voices as composers.

And he kept challenging us during the day. Writing groups threw away pre-prepared songs, and they performed different songs on the spot, played around with new arrangements and in one case abandoned their musical theatre repertoire and played him one of their favourite self-penned songs. All this so he could help us on our journey.

We all got to have lunch and run our questions past Claude-Michel and then at the end of the day we had a Q&A to cover any burning questions.

Sara and I wanted to know about the transition from pop song writing to musicals that Claude-Michel has done so successfully, and that we are in the process of doing. His answer: he has always told story in song. Never let up on the story and add a new idea every 30 seconds.

We left buzzing. Full of ideas. Exhilarated. And with a few, new musical theatre friends who had been equally surprised and challenged during an absolutely amazing day.

I did dream a dream.