Home » Spotlight: Becca Anderson – To Be It, Do It

Spotlight: Becca Anderson – To Be It, Do It 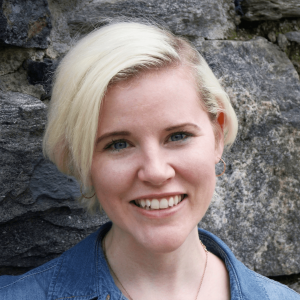 In 2018, I have presented two readings of two separate musicals, completed full rewrites (new drafts) of both of those same musicals, written a full act of a new musical, started and finished a full-length play, written a pilot, written and had a full production of a commissioned work, and have continued to submit my works to theatres for readings and productions. You’re probably thinking I’m one of those lucky writers living in a penthouse with oodles of time on my hands, spending my trust fund on designer cocktails.

I’m sorry to disappoint you, but I work at a survival job for 40 hours a week with an hour commute each way. I also have a large dog that needs a lot of exercise every day. I’m not even sure if those trust fund writers exist, but if you’re one and reading this, I will happily accept Venmo and Paypal donations to support my writing efforts. Barring that happening, I’ll keep chugging along like I always have, writing and rewriting, and submitting my work.

I’m frequently asked by fellow writers how I get so much writing done with a full-time job. The answer is boring. I write.

I write when I’m exhausted after a long day at work and would rather just watch Netflix. I write when I’m in the zone and excited. I wish I had Hermione Granger’s time turner and could make more time to write, but alas, I just have to use the time I have: the same twenty-four hours as everyone else.

This forces me to get specific, though. I sleep eight hours a night, I work eight hours a day, I commute two hours a day, and I need to eat and care for my dog and spend time with my partner at least two hours a day. That’s twenty hours total. I have another four hours a day I can use to either spend more time with loved ones, exercise, relax, or write. I try to exercise regularly, which I find can be its own form of relaxation, but that still leaves me with plenty of time to write. Even if I use three and a half hours of that time for non-writing activities, I can write for a full half an hour! I can write a thousand words in that time, and I bet you can, too, if you turn off your distractions (bye, Facebook, Instagram, and blog posts like this one).

To make sure those precious four hours a day don’t slip away from me, it’s important that I plan my time. I keep a diary, and I map out my writing time every day. If keeping a diary is tricky, I highly recommend putting appointments in your phone and setting it to beep at you obnoxiously when it’s time to write. A recurring, beeping reminder can make you feel guilty in just one or two “dismiss” swipes. The key is to know what time you’re supposed to write and to do your best to stick with it. I try to write for at least thirty minutes every day. Somedays I only squeeze in fifteen minutes, but other days I might write for three or four hours. The main thing is to write daily. Those small increments add up. The majority of my writing sessions are under forty-five minutes, but 365 days of those sessions can lead to a massive amount of work.

On weekends, I tend to household chores, shop for groceries (wine) for the week, and do more writing. Sometimes I’ll hang out with friends, watch a movie, or go see a show, too. I also try to go running on weekends.

I keep my writing time sacred. If my calendar says I need to write and coworkers want me to join them for drinks, I tell them I can’t because I have a prior engagement. It’s not a lie. I’ve told myself I’m going to write and put it in my diary. That doesn’t mean I have no social life, but I highly value and staunchly protect my writing time.

Figuring out the balance that was right for me took time and trial and error, but when I finally sat down and listed where all my hours were going, I was amazed by the fact that I had those four extra hours every day. When I think about all the days when I didn’t take advantage of those hours and all of the writing I could have done, my heart aches. There were ideas for plays that I never wrote and later saw someone else create. There were submission opportunities I missed. There were prizes and grants perfect for my shows that I couldn’t pursue because my scripts were unfinished.

So I told myself I needed to step up my game. To be a writer, one has to write. Yes, there’s more to it, but then again, no, there isn’t. Writing makes you a writer and writing is how you finish your writing projects.

What about all the ideas that pop up while you’re in the middle of a different project? Keep a list, and focus on the projects you already have. An unfinished play or musical is just that – unfinished. You can have a laptop with ten of those or you can have a list with nine ideas and a full draft. And then you can write the next one.

I know it sounds obvious and more than a little patronizing, but discipline feels better than regret. Write.

Becca Anderson is the co-author of the musicals Academia Nuts (Best New Musical, NYMF 2014), Snow Way Out (The Micro-Musical Theatre Show), The Peculiar Tale of the Prince of Bohemia and the Society of Desperate Victorians (Goodspeed Festival of New Musicals, 2019), Hatter (Indiana University 2014, NYU 2011, Ronald M. Ruble New Play Prize Finalist, 2013), Heist, Grandma’s Last Hurrah, and Period Piece (The Marilyn Monroe Theatre 2010) and the author of the plays President Mom (with Dan Marshall, Notre Dame College 2016, Caryl Crane Youth Theatre 2015, ‘Iolani School 2015), Bedtime (The Blank Theatre Living Room Series 2015), Baby Factory, Dead Behind the Eyes or The Ingenue Play (Vintage Theatre’s New Play Comedy Festival 2018), and Over-Ripe (LAFPI SWAN Day 2014, Manhattan Shakespeare Project 2011). Her works have been finalists for the Leah Ryan FEWW Prize, the NuVoices Playwriting Prize, the Trustus Playwrights Festival, and the Pittsburgh New Works Festival. Her play President Mom won the 2014 Ronald M. Ruble New Play prize and a 2015 Tam & Young Arts Chair Visiting Artist Residency in Honolulu. Becca’s songs have been performed on six continents, but she hopes that Antarctica will happen at some point, too. She holds both a BFA and an MFA from NYU’s Tisch School of the Arts.