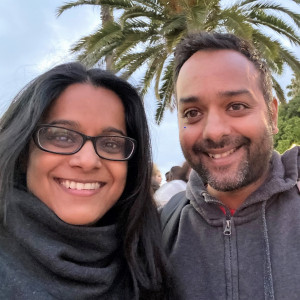 Meet MMD members, writing and life partners, Sumerah and Ajay Srivastav! They share how they got into writing together, the way they work, how they overcome challenges and what they hope for the future of diverse musical theatre.

AS: Around 2010 I was approached to provide the songs for a short re-telling of ‘The Ballad of Layla & Majnun’, which is an Arabic story with similar themes to Romeo & Juliet. This switched me on to the idea of musicals and the songs being integral to the story telling and I wanted to learn more. Later I got the chance to be a part of Stratford East’s Musical Theatre Initiative, which really blew the lid off what I thought musical theatre was and really got me engaged in it as an artform.

SS: Ajay and I have always talked about bringing our individual skills together on a project and musical theatre seems like the perfect match. So, in 2015 we applied to join the musical theatre initiative at Stratford East theatre. The process of collaboration, mixing words and melody together into a cohesive narrative was incredibly challenging but also hugely rewarding. We became excited and enabled by Fred Carl and Robert Lee to tell the kind of stories that we wanted to, based on our experiences about our community and who we are. We caught the bug and enjoyed it so much that we returned for 3 more subsequent years.

AS: Two musicals, the first is ‘Bollywood Rose’ which we showcased at BEAM 2018, about a girl who falls into an old Bollywood movie – how she changes the archetypes and how they change her. This piece started life at MTI and then was developed further as part of Rifco Theatre’s British Asian Festival. The other is ‘Back in the Daytimer’, which is about a guy who travels back in time to the clubbing days of his youth in order to change his life in the present. This musical is in receipt of development support from Rifco Theatre, where we are Associate Artists and Arts Council England. I am also recording my second album as a solo artist.

SS: Currently, I am writing on the first season of a Netflix show called Lupin. At the same time, I am collaborating with Ajay on completing ‘Back in the Daytimer’. We were originally meant to do an in person workshop and showcase but given everything we have agreed with ACE to move that activity completely online.

AS: I tend to collect and develop ideas in my head, in between things; my day job, the school run, gigs, housework. I will make brief notes in my diary or recordings on my phone. Then when I can I grab a day to myself, I sit down with instruments and a computer and complete a first draft. Re-writes are done on the fly.

SS: I don’t have a particular time of day exactly to write but I do have the best kind conditions for me to write and those are – I need to be fed, watered and rested (I can’t work on an empty tank). As a mother I also need to know that my family are content, and everything is alright in their world so that I do not feel guilty about leaving them an entering the closed world of my imagination. Other than that, I will write at any time of day and in any location especially when there is a looming deadline!!

AS: I research the sound by listening to relevant material and I also develop musical mood pieces. Where possible I like to listen to dialogues, speech patterns and also research lifestyles.

SS: When we have an idea for a new musical we tend to talk it over – a lot.  Ajay and I will be trying to convince each other that the story is compelling enough or the character is interesting enough. We also consider whether the well is deep enough for a musical and we ask ourselves how much we care about it, to justify the significant time and emotional investment that will inevitably be needed to see it through. For me, plot and structure are just the mechanisms by which you tell a story – they are not the things that will make you stick with it. For me it always comes down to character and also what I want to say with the piece that hooks me in for the long haul and in my opinion, I feel that’s the same for an audience.

AS: Having to work with a book writer!

SS: Having to work with a compose/lyricist! Staying inside each other’s heads and making sure we are both writing the same story. Sounds simple enough but it is not and let me tell you, being married to the music man doesn’t make it any easier. We are constantly checking in with each other and making time to re-assess and adjust as we go. We also have found that most times we have to go through a whole first draft before we can actually identify what the story is really thematically about because when you start something you might think it’s one thing but after finishing a draft you realise it wasn’t that after all, it’s this other thing.

AS: Writers block is a luxury that I can’t afford. I tend play my way through it.

SS: Fortunately, as a writing team we have the benefit of being able to talk through a problem with one another. Each of us are just as invested as the other in the story that we are telling, and Ajay knows everything that I know about our characters and world. That makes it so much easier to break through those moments where you’re having huge problems and you can’t figure out a way to solve it. If it’s not a story problem and the block is just a question of procrastination and not getting words on a page then I find a very specific deadline tends to motivate me quite significantly.

AS: Get the idea down. No matter what time of day it is, where you are, how mundane you think it is… get it down so you can refer to it later.

SS: I have two. The first is writing a musical is hard and long so make sure you are collaborating with people you respect and actually enjoy spending time with because if nothing else it will make the journey all the more rewarding irrespective of the outcome and frankly life’s too short! The second, is from the TV writer Steven Knight who says the best way to write is to ‘Start’ and then to ‘Finish’. Now that may sound pretty basic but it’s so true! You have to put your butt in the chair and put the hours in, get those words/notes down, set yourself a target and finish it without any excuses. Don’t give up because you think it’s terrible, just plough through to the end and finish the draft. Then you have something… it might be a masterpiece, it might be awful, but at least you’ve got something that you can read, assess, evaluate, edit, change, improve, tweak, scrap if necessary but at least you’ve got something to work on and the more you work on it, the better your craft will become.

AS: Credit has to go to Fred Carl and Robert Lee who awakened me to the possibilities of musical theatre and gave me confidence in my abilities within the artform.

SS: Lin-Manuel Miranda without question. He has single-handedly demonstrated the case for what diverse musical theatre can be. He’s a constant inspiration. I wish we had an UK equivalent.

AS: I would scrap the traditionalist’s idea that the piano is central to the musical theatre sound.

SS: Greater access, support, opportunity, investment, commission and trust in diverse creatives to make new musical theatre that they are passionate about.

What are you listening to at the moment?

AS: The new Bob Dylan album

SS: Since being in the States I’ve been turned on to the Off-Broadway musical Passing Strange by Stew and am listening to Keys pretty much on repeat.

AS: The sense of community and the access to information and people.

SS: The lovely, passionate MMD people who are always willing to offer help and support when you need it, feeling part of a community of creatives and, of course, BEAM!