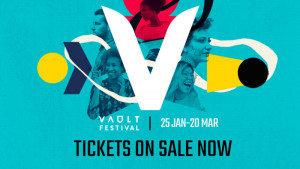 We’re so excited to see VAULT Festival returning in 2022 with its biggest season yet, celebrating their 10th anniversary with more than 600 shows over January to March and tickets on sale now.

We’ve poured through the announcement of all of these amazing shows (but still encourage you to do so yourself) and found everything we could see that involves Mercury Musical Developments or Musical Theatre Network members, or is a new musical being presented at the 2022 festival! If we’ve missed any, please comment them below or share them with us on Twitter – @MercuryMusicals and @MTheatreNetwork.

Amy March. The youngest sister. A painter. A pain. A piece of fiction.

May Alcott. The youngest sister. An artist. An adventurer. An actual person.

What happens when the world can’t distinguish you from the character you inspired?

In this electric new musical, multi-award winning Bottle Cap Theatre turn the lens away from Louisa – heralded writer of ‘Little Women’ – to focus on the sister who lived in her shadow, in a story of sibling rivalry, artistic ambition, laughter and loss.

Find out more about MAY.

THE TRIAL OF MEDUSA – Ellie Coote and Holly Musgrave

Medusa is alone in her cave on the island of Sarpedon. Monster, murderer and outcast. When she is called to trial for the homicide of 200 men she is forced out of hiding and into the spotlight.

High Court Judge, second-wave-feminist and rapstress Athena presides over the trial of the century. But when serial f*ck-boy Poseidon is called to the stand, Medusa’s testimony begins to unravel.

Why was she banished? Can she avoid her fate? And, is she guilty?

The Trial of Medusa is the world premier of a new R&B/pop musical from singer-songwriter Holly Musgrave and musical theatre writer Ellie Coote. This is a story of anger and healing, featuring an irresistible and eclectic score.

Come for the justice, stay for the chaos.

Find out more about The Trial of Medusa.

Guy is gay. Guy is a gamer. And Guy is looking for love.

In this Virtual Reality companion piece to leo&hyde’s electronic musical GUY, you are invited to take part in a 40-minute VR theatre experience.

One-moment heart-warming, the next heart-racing, Double Life combines live theatre and music with three VR experience: GUY himself will introduce you to the world of VR, immersing you in his story, surrounding you in his designs, and teaching you his favourite new GUY-inspired VR game.

Find our more about Double Life: A “GUY” VR Musical.

IS HE MUSICAL? MPTheatricals & Jude Taylor

Inspired by real stories, ‘Is He Musical?’ is an intimate and joyous exploration of the experiences of the queer friends who lived, loved and partied across 1930s London.

It’s Autumn 1933, and the Trocadero on Shaftesbury Avenue continues to be one of the most popular night spots in London. Upstairs in the Long Bar, a favourite meeting place for local queer folk, Laurence, an aspiring professional cellist new to the city, meets Wilfred, a charismatic, no nonsense footman keen to escape to the country. The pair quickly become good friends and find fun, drama and romance in a whirlwind of fabulously indulgent nights across the West End with their fellow sisters. But although their hidden world seems surprisingly free and easy each evening, how long can it last?

Find out more about Is He?

Little Sausage is a new musical about everything Piers Morgan hates: men defying toxic masculinity, vegan sausage rolls, and the truth. It is a verbatim musical that explores the relationship between veganism and masculinity.

Little Sausage follows a Yorkshire lad and how his relationship with friends and family changes during his journey from cheese addict to animal activist, including his decision to bulk up (with several cans of beans daily) in order to defy the stereotype that vegans are all ‘pale, pasty and wasting away’.

With words and lyrics comprised entirely of interviews with everyone from an Australian activist to a non-vegan who grew up in farming communities in Northern England, Little Sausage uses real words and folk-pop music to explore the myth that meat equals manliness.

Find out more about Little Sausage.

Cruel, Inhuman and Degrading is a new musical about growing up different in a country that censors your every word. Filtered through the lens of ’90s MTV Asia, it tells the story of Riz, a queer migrant and his relationship to his family and country, both of which he is finding impossible to decipher.

An all-Asian cast tell this deeply personal but startlingly relatable story about family, identity and censorship.

Find out more about Cruel, Inhuman and Degrading.

LET ME TELL YOU – A SCI-FI JINGLES MUSICAL

Jingles! They’re catchy and full of hidden meanings. Maybe your ancestors are trying to say hello, or maybe your lover is trying to tell you she didn’t ghost you, she’s just busy.

“Let me tell you” is a piece of anticapitalist experimental theatre. It’s set in a world where people make music by rinsing with a fluid that looks like mouthwash. It’s about a young queer person who feels lonely and takes comfort in jingles and branded messaging. They make jingles to advertise their friends’ unspoken thoughts. They call to their ancestors by brushing their teeth with Gumtwo toothpaste. Maybe one day they’ll write a jingle for a real advert, and their ancestors will hear! But the more jingles they make, the worse they seem to feel??

The jingles in the show advertise the unspoken thoughts of real-life people. You’ll hear some of them being interviewed.

Find out more about Let Me Tell You.

Some improvised musicals to look out for – well, they’re definitely new musicals, because they’re made up on the spot and never the same each night!

Farting at a funeral. Calling your teacher ‘Mum’. Farting at your teacher’s funeral then calling the Vicar ‘Mum’! We’ve all heard some juicy gossip, but have you ever wondered if there’s more to the story?

Following the success of their five star hit ‘Timpson: The Musical’, Gigglemug Theatre (Winners of The Stage Edinburgh Award) bring you a brand-new improvised musical based on gossip from the audience.

Find out more about The Bean Spillers: The Improvised Musical.

Find out more about Notflix.

DO THE THING: UP TO, BUT NOT EXCEEDING, 10 MUSICALS

Firm fringe favourites Do the Thing are with a whole new concept in improvised musicals. Each show a number is chosen via the audience and that will be how many musicals are made up on the spot that night by an orchestra of one (Ian Scott) and a cast of two (Stellar Firma’s Tim Meredith and Simon Plotkin). Could it be a single involved story, a high octane run of ten or something in the middle? No matter what expect Do the Thing’s trademark catchy tunes and ludicrous characters. They are chaotic but polished, always on the verge of breaking down but come together in the end, consistently daft but sometimes intelligent.

Find out more about Up To, But Not Exceeding, 10 Musicals.

This final one isn’t a musical, but involved MTN member Emily Beecher, in a new work show – please note, further details of this powerful full show haven’t been shared – if you click this link, please be aware of the content warning: Contains strong language and references to violent sexual assault & rape, suicidal thoughts, mental illness, trauma, miscarriage and infertility.

After a violent sexual assault, a 40-something single mum thinks she’s ‘fine’ until an unexpected email sends her spiralling into a serious mental health crisis. What does it mean to fall apart and what do we need to recover?

Summer Camp For Broken People is a dark comedy about rape, losing your mind and finding yourself. Using source material taken from diaries and letters written during her time at a psychiatric hospital, writer & performer Emily Beecher faced a world of two halves – being believed and not being believed. This is her story, fuelled by the need to speak the unspeakable in an act of catharsis, protest & solidarity.

Summer Camp is an examination of how mental illness infects our lives, our capacity for pain and, ultimately, what it takes to put a shattered spirit back together.

Find out more about Summer Camp for Broken People.

There’s heaps more shows to enjoy at VAULT Festival, from music, comedy, theatre, spoken work, gig theatre, and everything in between – if we’ve missed something and you’re an MMD or MTN member, or we’ve missed a new musical at the festival, please let us know!