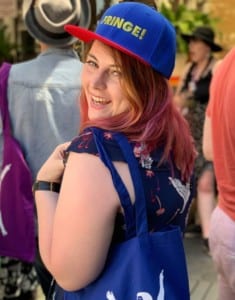 Ellen is responsible for Membership and Communications at Mercury Musical Developments (and Musical Theatre Network), joining the team in April 2020. She works across managing both the communications strategy and supporting and developing the membership body for both companies as well as championing new British musical theatre.

Ellen first entered the world of musical theatre when she was type cast as Dorothy in The Wizard of Oz in the school concert when she was five, because she had the right hair for it. Now still obsessed with hair, shiny shoes and musicals, she finds herself in a management role rather than an on stage role, having been an amateur performer, lighting and sound technician, and generally bad dancer before finding her place as an independent producer and arts marketer. She prefers to now help support talented artists achieve their goals and dreams, help sell shows, make shows happen and connect artists to people who might be able to help develop their work.

Don’t be afraid of her Aussie accent or her pink hair, the fact she actually says G’Day all the time, and the jar of Vegemite she keeps nearby at all times.